I undertake a variety of outreach activities to promote my research and raise awareness of Ediacaran palaeobiology. These include lectures to regional Geological Societies and Associations (including the national Geologists' Association in 2015), podcasts, and popular science articles. I have contributed to the development of award winning museum displays on Ediacaran fossils, and developed an outreach website on the Ediacaran biota: www.Ediacaran.org. Introducing local communities to the relevance and importance of fossil sites has proved a key component of successful fossil protection measures in the past, and I try to encourage and develop local outreach projects at my field sites.

I was lead author of the Global Comparative Analysis of Ediacaran Fossil Sites, a report commissioned by the Government of Newfoundland and Labrador and published in 2012. This report formed a key part of the successful nomination of Mistaken Point Ecological Reserve (MPER) to become a UNESCO World Heritage Site (the site was inscribed in July 2016). The report was described by the IUCN as a "benchmark Global Comparative Analysis of a fossil site". I am also proud that my research has contributed to the nomination of the Discovery Aspiring Geopark on the Bonavista Peninsula of Newfoundland for UNESCO Global Geopark status (decision expected in 2020).

I am a member of the Mistaken Point Scientific Advisory Committee, and in June 2017, as part of the 50th anniversary of the discovery of Mistaken Point, I chaired organization of a conference on the Ediacaran-Cambrian Transition (International Symposium on the Ediacaran-Cambrian Transition: ISECT), in St. John's, Newfoundland. I was also a co-convenor of a Royal Society meeting on the Origin and Rise of Complex Life in September 2019.

Together with colleagues Jennifer Hoyal Cuthill, Emily Mitchell and Charlotte Kenchington, I have been involved in the design and development of two temporary museum exhibits on Ediacaran palaeontological research at the Sedgwick Museum, University of Cambridge (2014 and 2019). My research also featured in an exhibit at the Cambridge University Library to celebrate 200 years of the Cambridge Philosophical Society (2019), where a cast of an Ediacaran fossil surface took pride of place in their entrance hall as the largest object they had ever displayed! I also advised the Lapworth Museum (University of Birmingham) on the Precambrian sections of their 2016 History of Life exhibit, and have installed exhibits at the University of Bristol, and the Factory (Coaker Foundation Building) in Port Union, Newfoundland, to share the wonders of Ediacaran palaeontology with a wider audience. I am currently involved in the redesign of the permanent Precambrian galleries at the Sedgwick Museum. 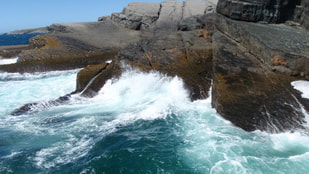 In 2012 I was interviewed by Palaeocast for an hour-long podcast that introduces the Ediacaran Period and its fossils, with specific reference to Mistaken Point in Newfoundland, Canada. Click on the image to access the Palaeocast website and a gallery of accompanying images. The Palaeocast site is full of great palaeontological podcasts on all manner of topics. I also had a small role in "A short history of the oceans", a podcast compiled by the Naked Scientists, again in 2012.

I was fortunate to be invited to be a panel member in the Naked Scientists Live event on "Fossils" in April 2014. Alongside Dr Stephanie Pierce and Jon Tennant, I was questioned by a studio audience on a variety of palaeontological topics ranging from the origins of life to giant fossil spiders! The show was broadcast on BBC Radio Cambridgeshire, and resulted in an hour-long podcast. Click the image for a link to the podcast. 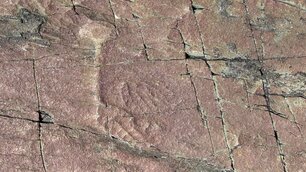 Short film on the Ediacaran biota

Stu Minnis of Virginia Wesleyan College shot a short film on the Ediacaran biota of Newfoundland in the summer of 2012. The film provides an introduction to the fossils and their importance, and features Jack Matthews, Richard Thomas and myself discussing Ediacaran palaeobiological issues. It is currently being shown at the Edge of Avalon Interpretation Centre, the gateway to Mistaken Point Ecological Reserve, in Portugal Cove South, Newfoundland. Click the image to view.
Public Lecture at the National Oceanography Centre, Southampton

This lecture, given in 2012 as part of the NOC seminar series on Marine Life, has been made publicly available on Youtube. You can view the lecture in its entirety, with all slides, below. Many thanks to Claudia and Joe Stewart for inviting me to give this talk, and for uploading it on to the web! Please be aware that some of the material in this lecture is now slightly outdated. 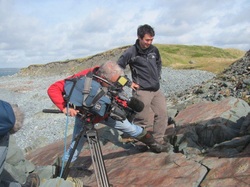 I have provided interviews discussing my research for magazines, newspapers, radio and television, mainly in Canada and the U.K. The image at left was taken in 2010 during filming of a short segment for CBC's programme "Land and Sea". Most recently I was filmed for a segment in the Channel 4 (UK) series "Walking through time" (first aired in October 2016), and did a variety of radio interviews surrounding our paper on a fossilized dinosaur brain (including ﻿Radio 4, Al Jazeera and the BBC World Service﻿).

I have designed fossil guides for tourists visiting the Mistaken Point Ecological Reserve in Newfoundland, and in 2013 produced this online resource for the Charnia Research Group, compiling all publications on the Ediacaran palaeontology and geology of Charnwood Forest. 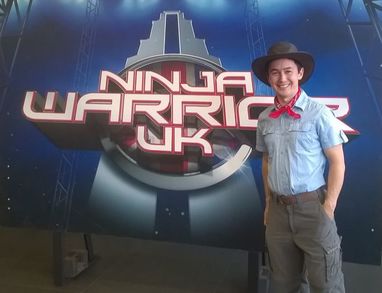